Depending on which version of the previous products you have, you may already have some of these updates, but the full set is included to ensure that everyone gets the most up-to-date cards. Previously "When you demolish an upgrade in a competitor's park, gain coins equal to its marked coin price."

The rule itself isn't a problem, but it does mean that this Showcase card depends on aggressive play to provide value, so it wasn't a popular choice to build.

The new revision produces value without aggressive play, based around the staff member focus of the Vampire pack.

Thanks to Jared Tannahill for the rule suggestion. Ninja Trick House is powerful, but the cost of an action to move items meant that in practice it was often used only once, in the last round, to complete blueprints and maximise attraction scoring, which makes it a less engaging option than many others.

Moving the effect to the Events step and removing the action cost makes it more useful throughout the game as well. Previously "Events step: You cannot play the bottom half of Event cards."

Reworded to use the same phrasing as the revised World Peace. This version now prevents attacks from sources other than Event cards.

It does now allow a couple of relatively benign bottom-half effects that were prevented, such as Bank Robbery. It seems the Sheriff will look the other way as long as you play nice with the other folks in town. Previously "Events step: You may choose to play no events from your hand at all. If you do, gain 10 coins instead."

The previous wording caused some confusion regarding the timing of the choice. Do players take the money immediately, or only at the end of the Events step when they have in fact played no events?

The revised wording is intended to make it clear that if the player gains coins immediately if they choose that option, and playing events (of any kind, for simplicity) is then prohibited. Previously "Once per Guests step: Each park with the lowest star total scores 5 extra stars."

The revised wording now uses the phrase "including all other effects" to answer questions about the timing of when to apply this effect compared to other star-generating effects. Previously "Intrusion. Demolish the topmost two upgrades on the attraction closest to your park entrance and gain coins equal to their marked coin price".

Demolishing two upgrades gave rise to some questions in relation to sequencing their demolition. For example, can the Flagpole protect the second upgrade from demolition? There is an answer, but it requires a deep dive into esoteric rules territory. Reducing the damage to one upgrade removes the problem, and it's unlikely anyone will shed a tear.

It also gave an opportunity to reword using "nearest" instead of "closest". "Closest" is deprecated, just to keep the term visually distinct from "close".

Previously "Park step: The cost to build attraction and upgrade from the Market is doubled."

The original wording caused some questions about interactions with other cards that modify the build price, such as Building Contractor or Renovation. The revised version standardises on the phrase "including all other effects" to address this.

Blueprint D004 - We Spared No Expense Previously "At least 3 stars in total from Quality upgrades."

This change was driven by player feedback that it was too easy to complete this blueprint using only one or two attractions.

There was also a thematic disconnection that it was possible to have a high quality park that met the blueprint without actually having any dinosaurs.

Changing the requirement from Quality to Dinosaur Animals means taking more of a risk to achieve the necessary stars. Previously 30 points for the required section of this blueprint.

This change was driven by player feedback that the required section was overpaying relative to its difficulty. Previously "Park step: The event cains 2 coins each time a player pays coins to build from the market. Guests step: Remove all coins from this event and keep them."

Reworded to use the new keyword "collect", which means to remove items from a card and keep them.

The effect is also widened to include any time a player pays to build, not just in the Park step, and uses wording more consistent with other enduring effects. Previously "Events are blocked from affecting this staff member."

With the addition of the Comicbook theme pack and the staff power cards it includes, the Android Greeter would be too powerful if a staff power could be added, since it would be impossible to dismiss or make her unavailable.

Thematically, this also prevents the Android Greeter from using biological effects such as the Vitalising Serum and the Mutant Insect DNA.

Previously "Once per Guests step: Gain 3 extra coins for each animal upgrade on open attractions in your park."

The previous wording paid out per animal. With the addition of the Ocean theme pack, plus the animals in Dinosaurs, and the likely future inclusion of at least one more pack with a significant number of animals, the upper limit on the Animal Feed Seller was too high

The revised wording pays out per attraction with an animal, which caps the payout to 5 or 6 attractions. Previously "Once per Park step: You may look at the top card of the City deck. This does not use an action."

Moving this effect to the Events step means you must wait until the next round after recruiting to use the ability, but also gives you more time in the round to adjust your choices based on your knowledge of the future, such as not playing Event cards that might be useful for defence. 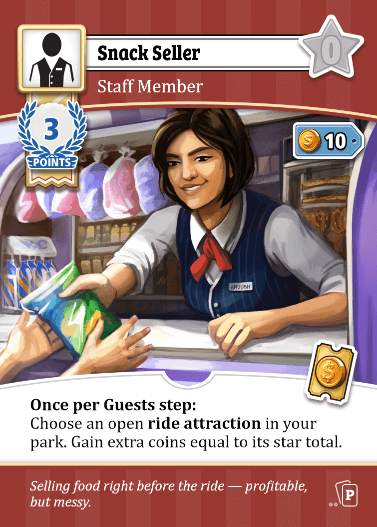 Previously "You may reopen up to two attractions in your park."

The Technician was always a strong defence against closure effects, but with the addition of the Kaiju theme pack, being able to reopen an attraction can be worth 10 points, so reopening two attractions at once is overpowered for such an inexpensive staff member. The Wi-Fi symbol used in the Hacker pack is present on a few cards in other packs where appropriate, such as the Call Privacy Booth in Comicbook. Adding it to the Information Kiosk in the base game is a good thematic improvement. Previously "Active only when the attraction is open. The attraction and all of its upgrade cannot be demolished."

The revised wording adds a limitation "by events", which means that demolition by the owner during the Park step is now permitted, along with any demolitions required in the Cleanup step, such as the Lunatic Lair in the Comicbook pack. The new wording also does not prevent demolition in the case where there's more than one dinosaur on the same attraction. Previously "After setup: Deal 5 Blueprints to each player.  Each player chooses one to keep, and passes the others to the left. Each player then chooses one more to keep and discards the remaining cards."

Now it specifies that any leftover cards are shuffled into the Blueprint deck, to ensure that the Blueprint deck is always reconstructed after the drafting, so there is no Blueprint discard pile at the start of the game. Each player's choices are kept more private because the unchosen cards aren't exposed to all players by being revealed in the discard pile. Previously "Remove two Unfair City cards from the bottom of the deck to reduce the game to 6 rounds. Remove all Showcase cards and Blueprint cards marked Difficult or Insane from the game."

Reworded to simply say "remove two cards from the bottom", so that it will work equally well with the Kaiju City cards.

The previous version confused some players who thought some Showcase cards were also marked Insane, so separating the sentences makes that clear.

It also didn't mention shuffling the Blueprint deck after removing the specified cards, so that oversight is corrected. Previously "Reveal your Showcase cards to the player on your left. They choose a card for you to start the game with, already built into your park for free."

Added "After setup" to be clear about when the rule should be applied.

Reworded to remove the phrase "for free" to ensure there's no future conflict with any Showcase cards that say "cannot be built for free". Previously "You cannot use Event cards or Park card abilities that affect other players."

Previous wording allowed for a loophole around abilities of Showcase cards, and would have allowed a similar loophole regarding Mastermind cards.

The previous wording also raised questions about whether it prevented effects such as the movement of the Alien Ambassador, because moving has an effect on another player's park.

By limiting the effect of World Peace to the Events step only, any Cleanup step effects are definitely not affected. By not naming specific card types to be prevented, anything in the Events step that affects another player is prevented, regardless of its source.